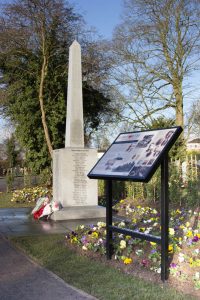 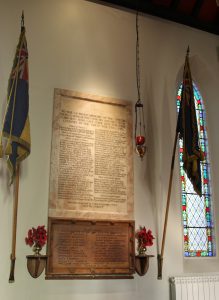 The Roll of Honour in St Mary’s Church, Garforth together with the War Memorial in the cemetery, commemorate Garforth Soldiers who died in  World Wars.

This site aims to provide background on these men, their families, work, where they lived so there is a better understanding of who they were and their lives. 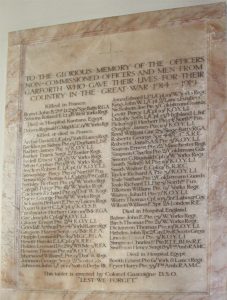 Names of Parishioners who served King and Country began to be recorded on The Roll of Honour in July 1915
The Tablet was presented by Col. Gascoigne.
It was dedicated on 18th June 1950 by the Archdeacon of Leeds, the Ven. H. Lovell Clarke.
The Roll of Honour for fallen Soldiers in the 2nd World War has also been researched. 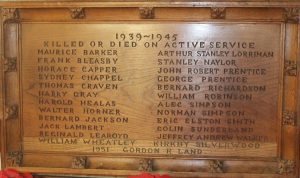 Gordon R Land was killed in the Korean War

There are 2 Garforth residents who survived the wars but who nevertheless I feel should be recognised for their outstanding service. Sergeant Albert Mountain who was awarded the Victoria Cross in W1
Sir Augustus Walker who served in WW2 and achieved the rank of Air Chief Marshal.

Link to Map of UK and Foreign Cemeteries, old mines and locations of homes of people on The Roll of Honour

This information is being compiled by Tony Robinson – a Garforth resident

For The Fallen
They shall grow not old, as we who are left grow old:
Age shall not weary them, nor the years condemn.
At the going down of the sun and in the morning,
We will remember them.
Laurence Binyon