He was Born in 1896 and was the eldest son of Andrew and Catherine.

He was one of 9 children.
Enlisted in 10th battalion Kings Own Yorkshire Light Infantry
Thomas was Killed In Action on 27th September 1915
Commemorated Loos Memorial  – Commonwealth Graves
Loos-en-Gohelle
Departement du Pas-de-Calais
Nord-Pas-de-Calais, France
Plot: Panel 97 and 98.
There is no known grave for Thomas.
His total effects of £6.14s.2d was sent to Father Andrew.
He is commemorated in Garforth Cemetery B280 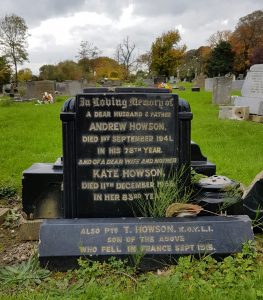