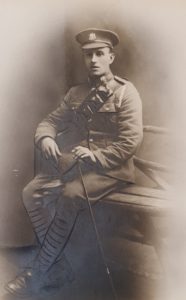 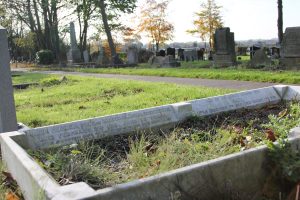 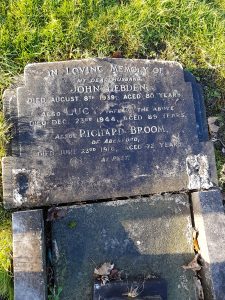 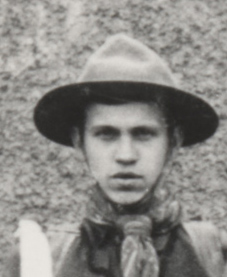 He would have been 17 years old in the Scout Group Photograph.
He enlisted in the Territorial Army at Carlton Barracks on 27th August 1909 at the age of 18. The same day and place as George Dacre. Bertram was living at 88 School Terrace , Garforth.Next door to George. Its likely that they had grown up together and were good friends.
Married Hilda Browning 25th August 1917 in St Mary’ Church, Garforth. His occupation was a Soldier
Photo taken 1908 in Scout Group
He was discharged from the Army 23rd April 1918
Bertram’s Daughter, Edith J. was born Q4 1918
He died Q2 1964 aged 72 (Barkston Ash Registration District)

Sister – Ivy H. (b 1895) in Garforth
Sister – Annie H (b 1896) in Garforth Her married name was Thompson. She lived in Haliday Court and provided the names on the Scouts Group photograph to Ken Woodhead in 1988.
Brother – Edwin H. (b 1898) in Garforth .As a 13 year old in 1911 Edwin was working at Garforth Colliery as an underground labourer.
In 1911 the family were living at 88 School Terrace, East Garforth. a four room dwelling. John and Lucy had been married 30 years and had 8 children 6 of whom were still alive.
Also living there was John snr’s five year old Grandson Richard Walker,.Ethel’s son, John Jnr’s Nephew.
John jnr was a cousin of Robert Clarke Dixon .another Soldier listed on the Roll of Honour. John’s Father, John snr, and Annie Dixon nee Hebden were bother and sister.
John jnr was 1st cousin once removed of Walter Horner killed in WW2

Thanks for background infor. to David Hebden – Son of Benjamin and Grandson of John Hebden