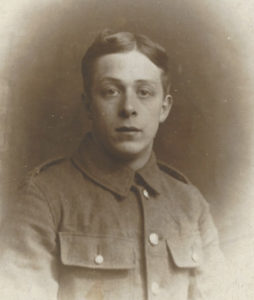 Baptised 26th June 1898, son of George and Elizabeth of 35 Gascoigne Row, Garforth . They had 12 children, 8 of whom survived.
He enlisted originally in the King’s Own Yorkshire Light Infantry then transfered to 7th Battalion Leicester Regiment
Served in France and Flanders and was Killed in Action  at the Battle of Bazentin Ridge (Somme)14th July 1916 aged 18. His body was never recovered
Commemorated at Thiepval Memorial
Departement de la Somme
Picardie, France
Plot: Pier and Face 2 C and 3 A. Commonwealth Grave Thiepval Memorial 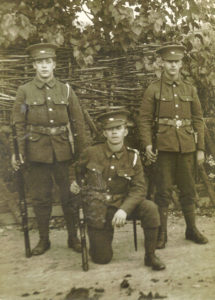 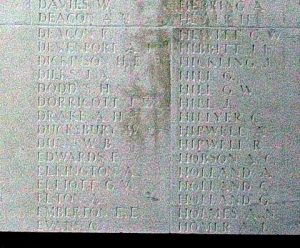 The Dickinsons all came from Garforth (Brierlands?) as did the Cockerhams (Firth Fields) on Emerson’s mother’s side.  They moved to 35 Gascoigne Row from The Moor around 1887. The terraced rows were on Main Street,  demolished in the 1960s to make way for the shops on the left hand side looking towards Church Lane. The property stayed in the family until around the 1950s. Descendant’s great grandma, Mabel, and her husband, George Jr (1887-1952) lived there until he died.

Grateful thanks to a descendant of Herbert who provided background information