John was born on 26th February 1890 and baptised on 1st March 1890 in Lofthouse. He was the eldest son of George Priestley B. and Mary Elizabeth B of Manygates Park, Sandal, Wakefield.
Signed on at Colsterdale with 15th Battalion, Prince of Wales Own West Yorkshire Regiment.

Edwin served in this battalion. He was obviously wounded in France shortly after his arrival. He would have responded to Kitchener’s volunteer army recruitment drive

It is highly likely that he was wounded in the first phase of the Somme offensive 1916 – The Battle of Albert – the 31st Division’s objective was to assault Serre, a German strongpoint. The battle commenced on 1st July and concluded on the 17th. The 15th (Service) Battalion (1st Leeds) is better known as The Leeds Pals.

John died of his wounds on 8th July 1916 in
The Royal Victoria Hospital in Southampton and is buried in
Netley Military Cemetery, Eastleigh Borough, Hampshire SO31 4TS 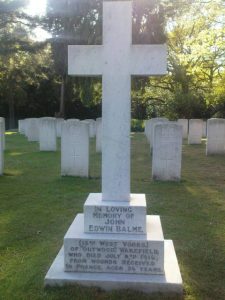 Mother – Mary Elizabeth B. Born 1868 in Dewsbury
John Edwin B. Born 26th February 1890 in Lofthouse
In 1891 the family were living with 60 year old Francis Balme at the Post Office Lofthouse.
Brother – Francis Richard B. Born 1893 in Lofthouse
Sister – Emily May B. Born 1895 in Lofthouse

In 1911 father George was a Colliery Agent, brother Francis Richard was an Accountant Articled Clerk and John Edwin was a Colliery Clerk. They were living at Newton Lane, Outwood.