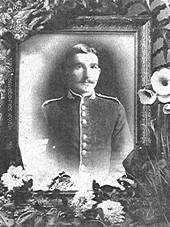 Occupation in 1901 Coal Miner Hewer. On 1st September 1906 he married Beatrice Cotterrell (22) in St Mary’s Bryanstan, Marylebone, London. He was a soldier based in Guards Depot, Caterham. Beatrice’s father was William, a soldier (deceased). They had two daughters Joan (b 1913) and Phyllis (b 1906)
His parents were James and Sarah Anne.

His wife, Beatrice was living at 87a Queens Road, Lavender Hill, London.