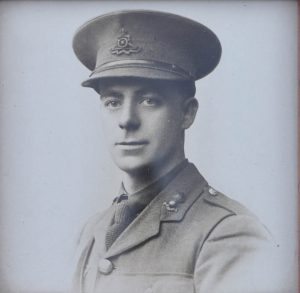 John Bennington Breed jnr (b1882) was the son of John Bennington Breed snr(b1853) and Clara (nee Riley) (b 1857) They were married in Nov 1880. JBB snr had been born in Wendling, Norfolk and Clara in Bradford. On their marriage Banns in 1880 father John’s occupation is shown as a Flag Cutter.
By 1901 their residence is shown as Lidgett. At this time John B Breed jnr had six sisters and two brothers,the youngest of whom was 2 year old Charles Edward. He later enlisted in 1916 aged 17.

John attended Elmfield College in York and is commemorated on their Roll of Honour Memorial.
On 6th October 1906 at the age of 24 JBB jnr married Maggie Marginson also 24 in the Primitive Methodist Church – now occupied by SLP Dance College.. He was living in Cypress Terrace, Garforth and she at Station Terrace Garforth. Her father, George, was a colliery Under Manager.Both JBB snr and JBB jnr were Dress Shirt Manufacturers. 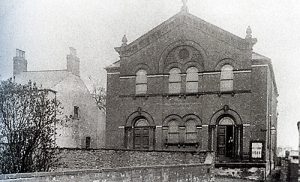 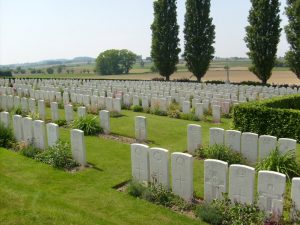 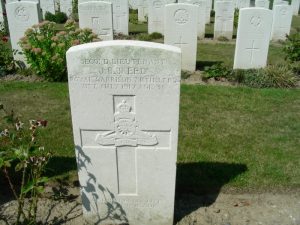 Additional information on John B. Breed can be found on a website compiled by Mrs Jean Hanby, a great grand daughter of JBB. The passage below is a summary of the information.

Before the war John Breed worked in a mill in Leeds that made flags and banners. This was the family mill (E.Riley and Co Ltd, Marsh Lane, Leeds.) His address was 4 Methley Mount, Chapeltown, Leeds. According to his war diary, John Bennington Breed arrived in Le Havre on 30th January 1917 with the Royal Garrison Artillery, 236th Siege Battery. He kept a daily diary of his experiences, including on every page how many shells were fired every day as he was in charge of armaments. He talks about the gas and the planes and airships going over and talks about shooting them down. He was killed on 31st July 1917 – after he had made a last entry in his diary at around 9pm. He was 35 when he was killed. He is presumed to have joined earlier due to his age. It is likely that he enrolled around 1915 as his training diary is dated 1915-16 and includes lots of drawings of guns, ammunitions and instructions for firing distances. He was a Second Lieutenant when he died. A memorial service was held in York on the 12th November, 1921 at Elmfield College York. A memorial card shows that he was buried in Klein Vierstarrt Cemetery, South West of Ypres. He left three children of which the contributor’s mother was the middle one, aged seven when he died. The diary makes sad reading due to the references to people getting killed and gassed. Occasionally he got a weekend off in a local town for rest and recouperation. In one exert the general tells them off for shooting when he was passing on his horse and he intends to report them. John Breed wrote that he would tell someone first. There is a great deal in the diary about conditions in the trenches over the 6 month period near Ypres on the Western Front.
Daily trench diary, 1917, Training diary, dated 1915-16, Memorial Service Sheet 1921, Photograph of John Breed, Bronze memorial plaque, Buckingham Palace letter that accompanied the Bronze memorial plaque. Black edged Memorial card 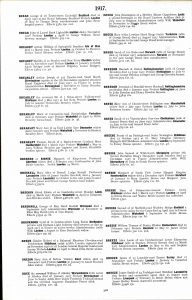